Popular comedian Amit Tandon all set for a unique unscripted homegrown comedy special at the National Centre for the Performing Arts on 6th March, proceeds of which will go to the Unbound Futures Foundation, an NGO which works towards providing access to basic healthcare and education to the underprivileged, with a special focus on the eradication of child marriage and adolescent girl child trafficking from the society. 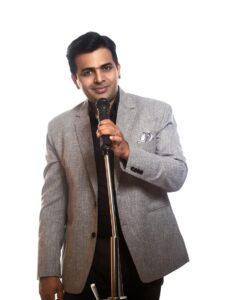 Speaking about the same, Amit Tandon says, “In such trying times, it’s upon us individually to stand by one another. This is a small initiative on part of my team and I, to lend support to the scores of NGOs like Unbound Futures Foundation who are battling such societal menaces single-handedly. The idea here is to come together as a society and help raise some funds for an NGO working tirelessly towards an important cause, and also try to bring smiles on people’s faces while we’re at it. I feel responsible as a thought leader/influencer for spreading awareness about these problems that everyone knows about, but no one works towards barring a few non-governmental bodies. This is my small way of helping out in my own capacity, and I hope that I manage to get a good response on this initiative so that more and more of such non-profit events can be planned and executed by other comedians of our country as well!”

Amit Tandon’s latest outing is with the television show called ‘Goodnight India’ which also happens to be his official TV debut. The show airs on Sony Sab TV, everyday of the week. One of the three Indian comedians on Netflix, Amit took the stage by storm in mega-hit comedy events series ‘Comedians of the World’ on Netflix in January 2019. This international platform had a select set of 47 comics from across the world.

Pankaj Tripathi continues his promise to strive for his farming roots

Pankaj Tripathi continues his promise to strive for his farming roots