The Versatile actor Parambrata has a good lineup this year and juggling from his work schedule between Kolkata and Mumbai, who doesn’t allow himself a break too often. But be it for work or a break he makes time for himself, where he wouldn’t miss a chance to escape. 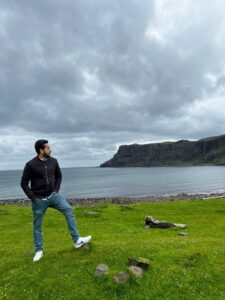 The multi-talented actor Parambrata’s love for travel and exploring local places of the city is no secret. No matter how busy Parambrata is, he always manages to take some time off from his busy work schedule and enjoy his mini vacations. If there’s one actor in Bollywood who knows how to do things differently, it’s Parambrata the actor flew to Scotland to enjoy some me-time along with his close friends and we can see some cool pictures from his vacations in Scotland.

The talented actor Parambrata looks super cool and is having a great time exploring the local places of this beautiful city of Scotland. We got some stunning pictures from his favorite places in Scotland. The pictures featured the scenic beauty of the Scotland city and the actor looked dapper in his casual outfits. 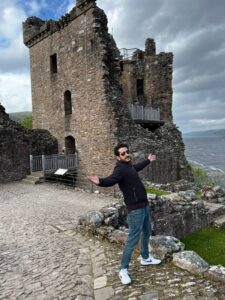 One of the Parambrata’s picture also featured the iconic SRK pose with both his hands stretched to his side.

Meanwhile, Parambrata’s recent Bengali film  Habji Gabji, co-starring  Subhasree Ganguly and directed by  Raj Chakraborty is receiving great response from the audience. He has already started shooting for his next directorial ‘Boudi Canteen’, starring Subhashreeand Param himself in the lead. The versatile actor is also shooting for the second season of the web series ‘Mumbai Diaries’ with Konkana Sen, and soon he is all set to play the lead in Kannada director ’s Pawan Wadeyar first Hindi Bollywood film.