It’s a celebration month for multi-talented actor producer Ravii Dubey for completing 16th successful year in the industry and being honoured with the prestigious Jan Gaurav Puraskaar from the hon’ble governor of Maharashtra on 21st August.

Ravii Dubey has always impressed viewers with his performances on every medium, be it television, films or the web. And recently, he was honoured with the prestigious Jan Gaurav Puraskar from the honorable governor of Maharashtra state on 21st August held in Raj Bhavan, Mumbai. 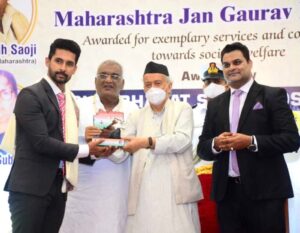 Ravii Dubey became the first television artist to get invited by a UN backed institution to converse with Shashi Tharoor and Suresh Prabhu on the occasion of 75th Independence Day in Mumbai. The dignitaries on the panel discussed ‘The Idea of India’ and on the occasion of the 75th Independence Day discussed the traits that make India the one of the greatest democracies in the world.

Ravii began his acting career in 2006 with a parallel leading role in the DD National TV show Stree Teri Kahaani and followed it with roles in lesser successful shows like Doli Saja Ke (2007) and Yahan Ke Hum Sikandar (2007), before starring in the popular family drama show Saas Bina Sasural (2010) and Jamai Raja (2014), which established him as one of the most popular and leading actors of Indian television industry. He recently was the host of Star Plus‘s game show Sabse Smart Kaun. He is one of the highest paid television actors.

Ravii Dubey a follower of nichiren daishonins Buddhism. He said, “I started following it (Buddhism) when I was going through a very rough patch in my life and I wanted some understanding of the chaos that was going on in one’s life. I wanted to align myself and feel better about myself. So, when things went out of control, I started chanting at that time.”

Hard work is enough for a man to turn his maybes into reality: Navin Agarwal