Sacred Games actor Saanand Verma shares his favorite tourist spot in India. According to him, tourism is divine and everybody in the world loves tourism. “The great thing about tourism is that it is a great revenue generator as well. From the commercial point of view as well as from the pleasure point of view, it is amazing. It basically connects humanity. Since tourism generates revenue, people protect the natural beauty and cultural heritage. It’s a great thing because we tend to protect good things in life,” he said.

Good things for him include everything which is naturally gifted to us and everything which is created by human mastery. “The great artistry like Taj Mahal or other tourist attractions. It is ultimate because people from various parts of the globe meet each other and witness various cultures and meet new people,” he said.

“At the end of the day, it all comes down to human connection which is extremely important for the human race,” he added.

According to him, exploring different cultures, languages and style of living is an ultimate thing. “It boosts the national economy and creates a lot of jobs for millions across the world,” he said. 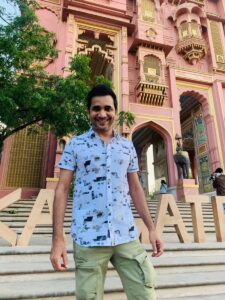 His favorite place is Leh, Ladakh. “It is mind-blowing. The overall culture of Buddhism is awesome. It is a beautiful place with a cool climate and mountains. It is amazing. The Magnetic hill is amazing. The layout of the area and surrounding slopes create the optical illusion of a hill. The hill road is actually a downhill road. Objects and cars on the hill road may appear to roll uphill in defiance of gravity when they are, in fact, rolling downhill, it is magical,” he said.

Vivian Dsena opens up about his fitness journey

Vivian Dsena opens up about his fitness journey