The most favorite and most exciting festival for all of us is the ‘Ganesh Festival’. It’s an amazing feeling that Bappa comes and lives with us. It’s very exciting for every individual, be it a child or an adult. Even for celebrities, Bappa becomes an attraction. Every celebrity tries to make something different at Ganesh Festival. This year Actor Sharad Kelkar has made eco-friendly Bappa in just 10 mins. Isn’t it surprising? Sharad Kelkar who is a dashing superstar of the Marathi and Hindi film industry has this hidden talent too. This is not easy to make Bappa in just 10mins but he has proven that it can be possible if you purely concentrate on your work. It has become a pleasure for Sharad. He is feeling happy and blessed. 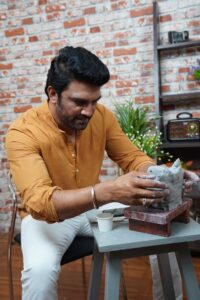 Sharad Kelkar made this under the guidance of Clay Artist, Sculptor Shubhankar Kamble. Shubhankar has taken sculpture and hand painting to a different level. Now, this 10 mins eco-friendly Bappa idol is just fabulous work done by Sharad and Shubhankar.

How did they make it happen in less time? What was the process… Everything you will get to see in their video on ‘Kadak Marathi’ YouTube Channel! 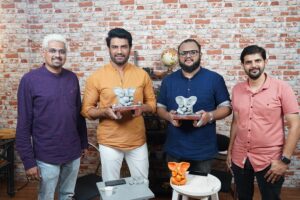 Sharad Kelkar is known for dubbing the Hindi Voice of Bahubali in the Baahubali Franchise . Kelkar has performed in television series, web series, and Indian cinema including Bollywood, Marathi, Tollywood, Kolywood industries. He has also worked as a fitness trainer in the past.

Sharad Kelkar was a Grasim Mr. India finalist. In 2004, he made his television debut with the show Aakrosh which aired on Doordarshan He attained the status of a TV star when he became a household name with the show “Saat Phere”. His wife Keerti Gaekwad Kelkar is also a television actress who has appeared in Saat Phere: Saloni Ka Safar as Chandni / Devika in a negative role. Together, in 2006 the couple also appeared on the dance reality show Nach Baliye 2.

Nestlé India collaborates with Reliance Jio, encourages everyone to be the Face of Hope